How to stabilise your egg whites. (1 Viewer)

If you've been eyeing up that lemon meringue pie recipe and you want to get the best meringue possible then have a read of this before you try it! For those of you that have had meringue or egg white mishaps then these tips are for you. 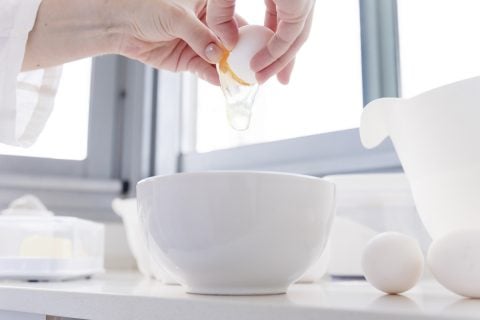 Here's how to get the very best from your egg whites.

Egg whites (also known as glair(e) or albumen) whisked or whipped at room temperature foam easily giving you a much better result when beaten.

If grease from a bowl or yolk from an egg has entered into your egg whites, then get rid and start again. The reason being is that any amount of fat contained in the egg whites will prevent the whites from foaming!

Egg whites should be used immediately after you have whipped them; otherwise, they start to deflate, lose volume and stability. When whisked, they can grow up to 6-8 times in size, so a rule of thumb is to use it or lose it!
Some recipes use cream of tartar; this helps to stabilise the egg white and holds it in shape, thus preventing weeping and giving you a much sturdier meringue (which is excellent for macarons). Alternative stabilisers such as sugar, lemon juice or white vinegar can also be used and will help stabilise them for a while longer by holding in the water and air controlling the volume of the whites.
Last edited: Oct 12, 2020
Click to expand...

Administrator · From Manchester, UK
I'm here to help inspire you, teach you and extract your hidden talents. I will introduce you to the fun limitless world of baking, cake making & decorating amongst others and I know that with a little love and willingness from you, your accomplishments will be endless! Make it, bake it, cake it! Have a go, you never know....
Staff member
Share:
Facebook Twitter Reddit Pinterest Tumblr WhatsApp Email Share Link
Menu
Log in
Register
Install the app
Top