As I previously mentioned, I made this frog topper that I have been umming and ahhing over. To be honest, he has cute traits, but my icing was a little dried out when I made him, and I threw him together in a short space of time. 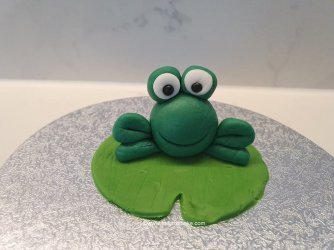 Overall I like the body and the size of the eyes even though they aren't symmetrical, but my deliberation was on his feet and whether I should do them webbed or not. I intended to display them as if they were tucked underneath his legs, so you wouldn't be able to see the webbing. Anyhow, in the end, I decided to leave them plain.

When I first made him, I used edible eyeballs, but I wasn't happy with his expression, so I removed them and used white icing circles and pearls instead, as this gave me free rein on how I portrayed his face.

He does have cracks in his leg and a crease in his right eye, but overall I think he's cute.

He didn't make it to my creations area, but I thought he was definitely worth displaying in here.

Administrator · From Manchester, UK
I'm here to help inspire you, teach you and extract your hidden talents. I will introduce you to the fun, limitless world of baking, cake making & decorating, amongst others, and I know that with a little love and willingness from you, your accomplishments will be endless! Make it, bake it, cake it! Have a go; you never know...
Staff member
Share:
Facebook Twitter Reddit Pinterest Tumblr WhatsApp Email Share Link
Menu
Log in
Register
Install the app
Top