As I previously mentioned, I made this frog topper that I have been umming and ahhing over. To be honest, he has cute traits, but my icing was a little dried out when I made him, and I threw him together in a short space of time.

Overall I like the body and the size of the eyes even though they aren't symmetrical, but my deliberation was on his feet and whether I should do them webbed or not. I intended to display them as if they were tucked underneath his legs, so you wouldn't be able to see the webbing. Anyhow, in the end, I decided to leave them plain. 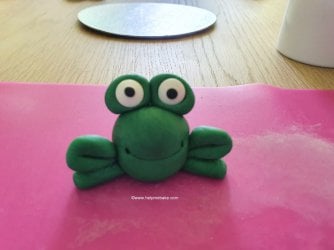 When I first made him, I used edible eyeballs, but I wasn't happy with his expression as you can see above, so I removed them and used white icing circles and pearls instead, as this gave me free rein on how I portrayed his face.

He does have cracks in his leg and a crease in his right eye, but overall I think he's cute.

He didn't make it to my creations area, but I thought he was definitely worth displaying in here.

I love him, he made me laugh when I saw him. I did see the cracks on his legs but I don't think that was too much of a problem. I'm glad you changed the eyes as the ones you've got now really make him and give him the fun aspect, even if they aren't perfect, he has lots of character.
I'm sure anyone who saw him would love him.

How to make a Harry Potter Sorting Hat Cake Topper

How to make a Rainbow Unicorn Cake Topper