In light of the recent campaign to storm Area 51 and free all the aliens I thought it might be quite fitting to make a cake to celebrate the event. As you can see, Aliens do exist and look extremely happy to be escaping! #Area51 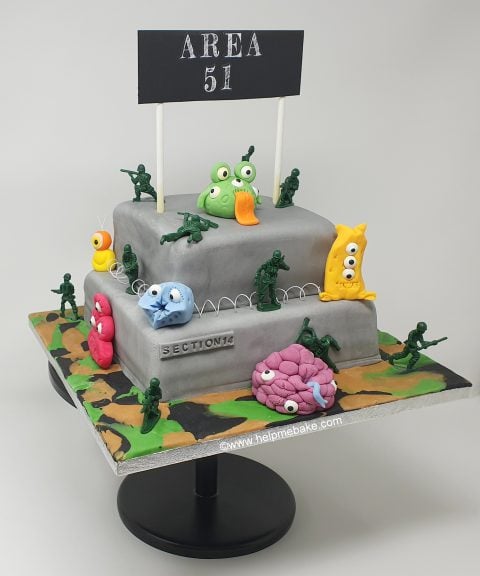 Please note that no aliens or soldiers were harmed in the making of this cake!

On a more informative note, the breakdown of this cake is as follows.

My daughter and her BIG imagination created the aliens that take pride of place on this cake!

You’ll be pleased to know that the Aliens won’t get very far and will be devoured later today!

Angie
I'm here to help inspire you, teach you and extract your hidden talents. I will introduce you to the fun limitless world of baking, cake making & ...
View thread (5 replies)

I love it, so original, they certainly seem happy to be let out.

That's why I couldn't tell you the concept because it was classified and a joint venture.

I originally asked Han if she wanted an Alien themed cake (because she doesn't do girlie) to which she initially replied no. Then after a few minutes, her brain kicked in, and she started to get giddy about it. She then told me about the Fb campaign to storm Area 51, so we decided to go with the Area 51 base and the Aliens.

I think it's great and does look fun, I bet you had a great time making that. I shall now go to the Today sub and send someone a message.

Awesome, we should see if they are anyone Shawn knows I bet Hans friends loved it

Staff member
Yeah, Shawn's down with the Aliens so he must know one of them!